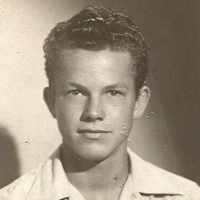 The Life of Lyle Dean

When Lyle Dean Van Horn was born on 31 August 1927, in Larned Township, Pawnee, Kansas, United States, his father, Louie Tyson Van Horn, was 40 and his mother, Jennie Allenor Nelson, was 33. He married Marie Antonette Reed about 1950. He lived in Santa Cruz, California, United States in 1951 and Bella Vista, Benton, Arkansas, United States for about 7 years. He died on 23 October 2010, in Haslett, Ingham, Michigan, United States, at the age of 83.

Put your face in a costume from Lyle Dean's homelands.