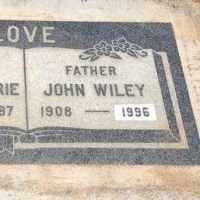 The Life of John Wiley

Put your face in a costume from John Wiley's homelands.

1 English: from a Middle English personal name derived from the Old English female personal name Lufu ‘love’, or the masculine equivalent Lufa. Compare Leaf 2.2 English and Scottish: nickname from Anglo-Norman French lo(u)ve ‘female wolf’ (a feminine form of lou). This nickname was fairly commonly used for men, in an approving sense. No doubt it was reinforced by crossing with post-Conquest survivals of the masculine version of 1.3 Scottish: see McKinnon .