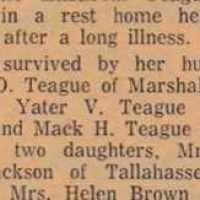 The Life of Mack Hunt

Put your face in a costume from Mack Hunt's homelands.

The Prohibition Era. Sale and manufacture of alcoholic liquors outlawed. A mushrooming of illegal drinking joints, home-produced alcohol and gangsterism.
1933

1 Irish: variant of Tighe .2 Cornish and Welsh: descriptive nickname for a handsome person, from Cornish tek, Welsh teg ‘fair’, ‘beautiful’. There has been considerable confusion between the Welsh and Irish names, both in Wales and Ireland.