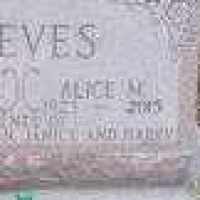 The Life of Alice Mae Lambert

Put your face in a costume from Alice Mae Lambert's homelands.

Charles Lindbergh makes the first solo nonstop transatlantic flight in his plane The Spirit of St. Louis.
1941 · The Tuskegee Airmen

The first African-American military aviators in the U.S. Army Air Corps were known as the Tuskegee Airmen, after the Tuskegee Army Air Field where they trained. The group flew over 15,000 individual sorties during World War II which earned them over 150 Distinguished Flying Crosses.
1949 · NATO is Established