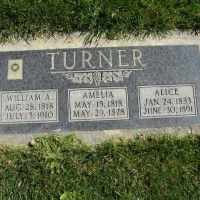 When Amelia Nichols was born on 28 August 1830, in Ely, Cambridgeshire, England, United Kingdom, her father, John Francis Nichols, was 36 and her mother, Mary Teasdale, was 34. She married William Augustia Turner on 15 October 1848, in Stepney, London, England, United Kingdom. She died on 29 May 1878, in Bluffdale, Salt Lake, Utah, United States, at the age of 47, and was buried in Utah, United States.

On a warm summer day the 28 August 1818, in Yoxford, Suffolk, England: Robert and Mary Steele Turner Welcomed [sic] into their family a baby boy. He was the fourth child and second son, His [sic] old …