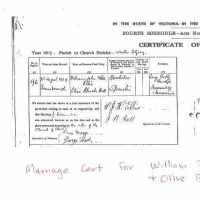 The Life of William John White

When William John White Ellis was born in 1881, in Long Gully, Victoria, Australia, his father, James Ellis, was 37 and his mother, Mary White, was 36. He married Olive Blanche Hall on 30 August 1919, in Victoria, Australia. They were the parents of at least 2 sons and 1 daughter. He died before 1957, at the age of 75.

Put your face in a costume from William John White's homelands.

There are no historical documents attached to William John White.