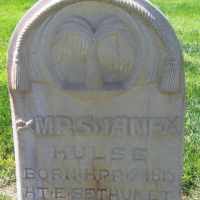 The Life Summary of Jane Gordon

Put your face in a costume from Jane Gordon's homelands.

Father, Benjamin R. Hulse was born January 3, 1815, in Long Island, New York. He was the son of James and Anna Robinson Hulse. He attended a Mormon meeting with a young lady, Jane Bennett. He wen …