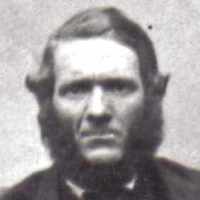 When John Eames was born on 29 December 1819, in Orcop, Herefordshire, England, his father, Samuel Eames, was 29 and his mother, Nancy Ann Castree, was 23. He married Sarah Elizabeth Powell on 3 February 1843, in Garway, Herefordshire, England, United Kingdom. They were the parents of at least 3 sons and 3 daughters. He lived in Monmouthshire, Wales, United Kingdom in 1851 and Radnorshire, Wales in 1861. He died on 24 November 1869, in Plain City, Weber, Utah, United States, at the age of 49, and was buried in Plain City, Weber, Utah, United States.

English: from Middle English eme, eim ‘uncle’ (Old English ēam). Most of the modern variants of the surname have post-medieval excrescent -s.

Biography of Hannah Jenkins Eames, emigrant pioneer 1868 By Maurine Clifford Hannah Jenkins was born 3 June 1832 in Crasswall, Herefordshire, England. She was the daughter of Henry Jenkins and A …