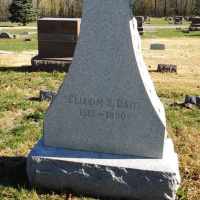 The Life Summary of Eliakim Spooner

Put your face in a costume from Eliakim Spooner's homelands.

Eliakim was the tenth child in a family of 11, the third son of Nathan Davis by his second wife Abigail Spooner. His boyhood days were spent at hard labor. His opportunity for education was very limi …