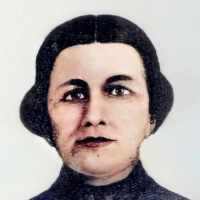 The Life Summary of Penelope

When Penelope Thompson was born on 29 May 1817, in Warwickshire, England, United Kingdom, her father, John Thompson, was 44 and her mother, Penelope Reynolds, was 41. She married Joseph Lewis Thompson on 28 December 1835, in West Bromwich, Staffordshire, England, United Kingdom. They were the parents of at least 8 sons and 4 daughters. She immigrated to New York City, New York, United States in 1855. She died on 9 December 1867, in Clarkston, Cache, Utah, United States, at the age of 50, and was buried in Clarkston, Cache, Utah, United States.

Put your face in a costume from Penelope's homelands.

PENELOPE THOMPSON THOMPSON 1816-1865 Penelope Thompson was born 22 March 1816 in Walsall, Staffordshire, England. She was the daughter of John and Penelope Reynolds Thompson. William Henry, her old …