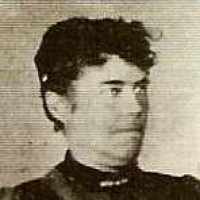 The Life Summary of Ann Loueza

When Ann Loueza Wade was born on 27 September 1846, in Galena, Jo Daviess, Illinois, United States, her father, James Arzo Wade, was 30 and her mother, Sarah Jane Elliott, was 19. She married Henry Andres Perry on 17 March 1865, in Virginia City, Madison, Montana, United States. They were the parents of at least 1 son and 4 daughters. She lived in Mount Pleasant, Henry, Iowa, United States in 1850 and Salt Lake City, Salt Lake, Utah, United States in 1860. She died before 1900, in Wyoming, United States, at the age of 53.

Put your face in a costume from Ann Loueza's homelands.

English: from the Middle English personal name Wade (Old English Wada or, via Norman French, from ancient Germanic Wado, of unclear origin but possibly related to Old English wadan ‘to go’).English: topographic name from Middle English wade ‘ford’ (Old English (ge)wæd ‘ford, especially a tidal crossing’) for someone who lived by a ford, or a habitational name from a place so called, such as Wade Hall in North Cove (Suffolk).Irish: shortened and altered from Mac Uaid, see McQuaid .