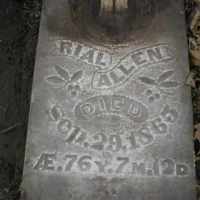 The Life of Rial

Put your face in a costume from Rial's homelands.

New Bern had been the capital of North Carolina in its early days. In 1792, the capital was moved to Raleigh because it was more the center of the state.
1792 · Becomes the 15th State

On June 1, 1792, Kentucky became the 15th state. It was the first state west of the Appalachian Mountains
1812

Sketch of the life of James Allen

Sketch of the life of James Allen Born 1807, Pioneer of 1862 - compiled by Maud Bliss Allen from interviews, diaries and records and contact with the different families. JAMES ALLEN was born the 14 …