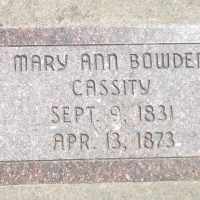 When Mary Ann Elizabeth Bowden was born on 9 September 1831, in Bristol, Gloucestershire, England, her father, William Bowden, was 21 and her mother, Elizabeth Churchill, was 30. She married Dan James about 1849, in Aberdare, Glamorgan, Wales, United Kingdom. They were the parents of at least 2 sons. She lived in Denton, Lancashire, England, United Kingdom in 1851 and Platte, Nebraska, United States in 1860. She died on 13 April 1873, in Genoa, Douglas, Nevada, United States, at the age of 41, and was buried in Tooele, Tooele, Utah, United States.