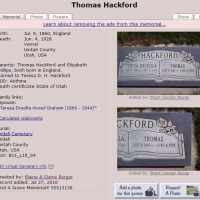 The Life Summary of Thomas Phillips

Put your face in a costume from Thomas Phillips's homelands.

English (Lincolnshire and Yorkshire): habitational name from Hackforth (North Yorkshire) or Hackford (Norfolk). The former is named with Old English haca ‘hook’ + ford ‘ford’, meaning ‘ford at the bend’. The latter likely has the same etymology, or may contain the Old English personal name Haca.

Elias Willis Howell was born on April 29 1837, at Riverhead, Long Island, New York. He was the son of Edmond Wheeler and Sarah Vail Howell. Elias’s mother joined the L.D.S Church in 1842, one y …