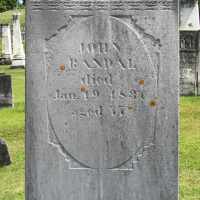 English: from the Middle English personal name Randel, a diminutive of Rand with the Anglo-Norman French hypocoristic suffix -el.