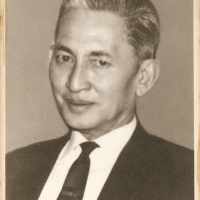 The Life Summary of Emiel

When Emiel van der Hartt was born on 11 September 1904, in Banjarmasin, Banjarmasin, Kalimantan Selatan, Indonesia, his father, August van der Hartt, was 25 and his mother, Eugenie Mathilde Schut, was 21. He married Louise Margaretha Ulitzsch from 7 April 1930 to 7 May 1930, in Kota Surabaya, East Java, Indonesia. They were the parents of at least 4 sons and 1 daughter. He died on 7 July 1971, in Enschede, Overijssel, Netherlands, at the age of 66, and was buried in Enschede, Overijssel, Netherlands.

Put your face in a costume from Emiel's homelands.

Dutch women get the vote.

There are no historical documents attached to Emiel.