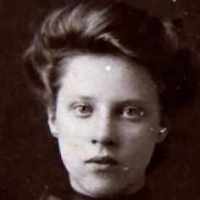 The Life of Dorothy Mae

When Dorothy Mae Clayton was born on 24 June 1891, in Luther, Wellington, Ontario, Canada, her father, John Lobley Clayton, was 46 and her mother, Maria Jane Davey, was 42. She had at least 1 son and 1 daughter with Frederick Albert Cunningham. She lived in Wellington, Ontario, Canada in 1901 and Saskatchewan, Canada in 1916. She died on 5 August 1985, in Saskatoon, Saskatchewan, Canada, at the age of 94.

Put your face in a costume from Dorothy Mae's homelands.