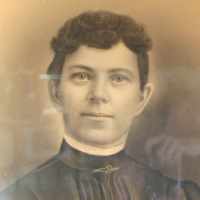 The Life Summary of Amelia Jane

When Amelia Jane Tristram was born on 27 January 1852, in Lower Crumpsall St Thomas, Lancashire, England, United Kingdom, her father, George Dixon Tristram, was 29 and her mother, Lucy Eliza Wright, was 27. She married John Bond on 25 January 1868, in Salt Lake City, Salt Lake, Utah, United States. They were the parents of at least 3 sons and 7 daughters. She lived in Aspull, Lancashire, England, United Kingdom in 1881. She died on 10 June 1905, in Blackfoot, Bingham, Idaho, United States, at the age of 53, and was buried in Blackfoot, Bingham, Idaho, United States.

Put your face in a costume from Amelia Jane's homelands.

On the 29th day of June 1887 the entire settlement of Henefer was saddened by a tragic accident. Amelia Jane Bond, the lovely vivacious 15 year old daughter of John and Amelia Jane Bond was thrown fr …