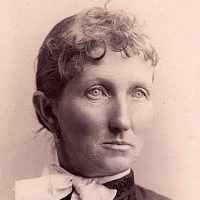 The Life Summary of Alice Louisa

When Alice Louisa Jost was born on 9 July 1839, in Lunenburg, Nova Scotia, British Colonial America, her father, John Alexander Jost, was 29 and her mother, Mary Ann Zwicker, was 27. She married John Moroni Foy on 28 August 1856, in Ogden, Weber, Utah, United States. They were the parents of at least 4 sons and 6 daughters. She died on 9 June 1901, in Warm Springs, Deer Lodge, Montana, United States, at the age of 61, and was buried in Kalispell, Flathead, Montana, United States.

Put your face in a costume from Alice Louisa's homelands.

In 1848, Nova Scotia became the first self-governing colony in the British Empire.

Some characteristic forenames: German Gerhard, Hans, Aloys, Erna, Erwin, Hans Peter, Heinz, Inge, Jurgen, Mathias, Reinhart.German (also Jöst) and Dutch: from a personal name, a derivative of Old French Josse, from Breton Iodoc, Latinized as Jodocus (see Joyce ). It can also be from the personal name Just , Latin Justus. The surname Jost is also found in Poland and Slovenia (compare with the form Jošt below).Slovenian and Czech (Jošt): from a personal name derived from German Jost and this one from Jodocus, the Latinized name of a Christian saint (see Joyce , compare 1 above).