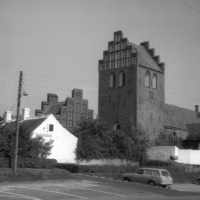 The Life of Lars

Danmarks Nationalbank is the central bank of the Kingdom of Denmark and serves as an independent and credible institution that issues the krone, the Danish currency. The bank undertakes all functions related to the management of the Danish central-government debt.
1829 · Oldest Leather Goods in Denmark

Kuffert Sorensen was established in 1829 by Carl Peter Sorensen as a leather goods company. Today the business has five locations and each are run by a member of the Sorensen family.
1847 · Casino Theatre (Copenhagen)

The Larsen family lived in this home on the corner of the Melby Churchyard and cared for the church while the children were small.