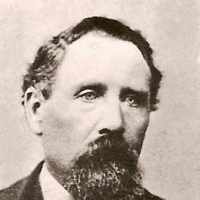 The Life Summary of John Davidson

When John Davidson Burt III was born on 12 January 1827, in Dunfermline, Fife, Scotland, his father, Andrew Burt, was 22 and his mother, Isabella Hill, was 22. He married Elizabeth Patterson on 27 August 1848, in Clackmannan, Clackmannanshire, Scotland, United Kingdom. They were the parents of at least 5 sons and 2 daughters. He died on 6 May 1906, in Brigham City, Box Elder, Utah, United States, at the age of 79, and was buried in Brigham City Cemetery, Brigham City, Box Elder, Utah, United States.

Put your face in a costume from John Davidson's homelands.

English (southern): variant of Bird , Bright , or Burd .German: Middle High German burt ‘that which is due or proper’, therefore a nickname for someone who has fulfilled his obligations properly.Jewish (from Poland and Ukraine): variant of Burd .

John Davidson Burt: Came to America on the ship ERIN'S QUEEN which left Liverpool, England, on 7 Sep 1848 and arrived in New Orleans, Louisiana, on 28 Oct 1848. The church leader was Simeon Carter. …