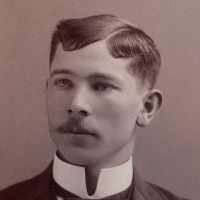 When Joseph Barney Sewell was born on 5 October 1844, in Yarmouth, Norfolk, England, United Kingdom, his father, Joseph Barnard Sewell, was 24 and his mother, Emily Ellett, was 28. He married Nancy Melissa Wilson on 26 April 1864, in Garden Grove, Decatur, Iowa, United States. They were the parents of at least 7 sons and 3 daughters. He lived in Poplar, Middlesex, England, United Kingdom in 1851 and Utah, United States in 1870. He died on 26 November 1891, in La Grande, Union, Oregon, United States, at the age of 47, and was buried in Ogden, Weber, Utah, United States.

Put your face in a costume from Joseph Barney's homelands.

Oregon became the 33rd state admitted to the Union on February 14, 1859.
1 English: from the Middle English personal names Siwal(d) and Sewal(d), Old English Sigeweald and Sǣweald, composed of the elements sige ‘victory’ and sǣ ‘sea’ + weald ‘rule’.2 English: habitational name from Sewell in Bedfordshire, Showell in Oxfordshire, or Seawell or Sywell in Northamptonshire, all of which are named from Old English seofon ‘seven’ + wella ‘spring’.

(Published in History of Idaho: The Gem of the Mountains Vol. 3 by James H. Hawley 1920) Joseph L. Sewell, a wholesale dealer in hides and tallow at Boise, comes to this state from Utah, his birth ha …