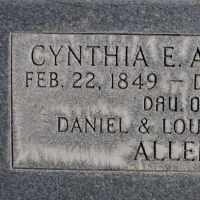 Put your face in a costume from Cynthia Elizabeth's homelands.

Prohibits the federal government and each state from denying a citizen the right to vote based on that citizen's race, color, or previous condition of servitude. It was the last of the Reconstruction Amendments.
English and Scottish: from a Celtic personal name of great antiquity and obscurity. In England the personal name is now usually spelled Alan, the surname Allen; in Scotland the surname is more often Allan. Various suggestions have been put forward regarding its origin; the most plausible is that it originally meant ‘little rock’. Compare Gaelic ailín, diminutive of ail ‘rock’. The present-day frequency of the surname Allen in England and Ireland is partly accounted for by the popularity of the personal name among Breton followers of William the Conqueror, by whom it was imported first to Britain and then to Ireland. St. Alan(us) was a 5th-century bishop of Quimper, who was a cult figure in medieval Brittany. Another St. Al(l)an was a Cornish or Breton saint of the 6th century, to whom a church in Cornwall is dedicated.