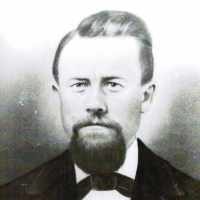 When Stephen Thompson was born on 20 June 1838, in Ireland, his father, Matthew Thompson, was 47 and his mother, Margaret Malorkey, was 23. He married Sarah J Cornwall on 6 May 1862, in Glasgow, Scotland, United Kingdom. He died on 13 November 1906, in Wallsburg, Wasatch, Utah, United States, at the age of 68, and was buried in Wallsburg Cemetery, Wallsburg, Wasatch, Utah, United States.