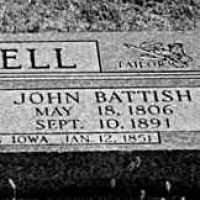 The Life Summary of John Battish

Put your face in a costume from John Battish's homelands.

English:nickname from Middle English, Old French burel, borel (also birel) ‘reddish brown’, referring perhaps to complexion or hair color. This was occasionally used by Normans as a personal name, perhaps a nickname substituted for the personal name. The word also denoted a coarse woollen cloth of this color, so the surname may sometimes refer to dress, or it may be a nickname for a maker of the cloth, a bureller.habitational name from Burwell in Lincolnshire, see Burwell .