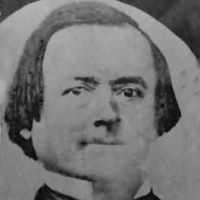 The Life Summary of John W.

Put your face in a costume from John W.'s homelands.

English: probably from the personal name Kabell', which may be a survival of Anglo-Saxon Ceadbeald, a compound of an originally Brittonic element cad ‘battle’ + Old English beald ‘brave, bold’.English: metonymic occupational name for a maker of rope, especially the type of stout rope used in maritime applications, from Middle English cable ‘cable’ (from Late Latin capulum ‘halter’, a word of Arabic origin, but associated by folk etymology with Latin capere ‘to seize’).English: metonymic occupational name for a horseman, from Middle English cabal ‘horse’.

I Martha Mariah Myers Hancock was born 9th of February 1858, at Salt Lake City. My father George Myers, of Swiss -German decent was born March 2, 1805 in Pennsylvania. He was the only one of his fam …