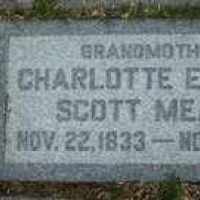 The Life of Charlotte "Lottie" Elenor

When Charlotte "Lottie" Elenor Scott was born on 22 November 1833, in Edinburgh, Midlothian, Scotland, United Kingdom, her father, Charles H Scott, was 31 and her mother, Elisabeth Allison, was 23. She married Jerome Bonaparte Meade on 7 November 1861, in Leavenworth, Leavenworth, Kansas, United States. They were the parents of at least 1 daughter. She lived in Saint Cuthberts, Edinburgh, Edinburghshire, Scotland, United Kingdom in 1841 and La Ballona Township, Los Angeles, California, United States in 1900. She died on 8 November 1919, at the age of 85, and was buried in Rosedale Cemetery, Los Angeles, California, United States.

Put your face in a costume from Charlotte "Lottie" Elenor's homelands.

Being a monumental event in the Texas Revolution, The Battle of the Alamo was a thirteen-day battle at the Alamo Mission near San Antonio. In the early morning of the final battle, the Mexican Army advanced on the Alamo. Quickly being overrun, the Texian Soldiers quickly withdrew inside the building. The battle has often been overshadowed by events from the Mexican–American War, But the Alamo gradually became known as a national battle site and later named an official Texas State Shrine.
1838 · Jenners Department Store Opens its doors

Jenners was founded by Charles Jenner as a department store for the community. The original building was destroyed by a fire in 1892 but, with a new design in mind, the store was reopened in 1895 with new features. It was named Harrods of the North after it was given Royal Warrant in 1911 and was visited by Queen Elizabeth II on its 150th anniversary. It was sold to the House of Fraser in 2005, which in 2008, made much needed improvements to the store.
1857 · Police (Scotland) Act 1857