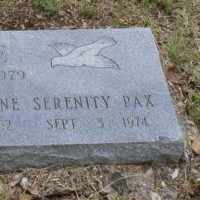 When Serenity Pax Rousseau was born on 3 September 1974, in Travis, Texas, United States, her father, Raymond Paul Rousseau, was 26 and her mother, Donna Lynne Shows, was 21. She died on 27 March 1979, in her hometown, at the age of 4, and was buried in Cedar Park, Williamson, Texas, United States.

Put your face in a costume from Serenity Pax's homelands.

Department of Education was organized to guide the schools throughout the United States in what to teach and how to teach it. The Department also collects data on the schools to see where government focus needs to go.
French: nickname for someone with red hair, from a diminutive of Roux .