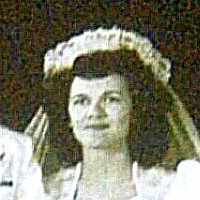 The Life of Edna Ward

Edna Ward Lopez was born on 8 December 1924. She married Jesus Alexandro Castro on 5 June 1947, in Tucson, Pima, Arizona, United States. They were the parents of at least 2 sons. She died on 15 January 2015, at the age of 90, and was buried in Boulder City, Clark, Nevada, United States.

Put your face in a costume from Edna Ward's homelands.