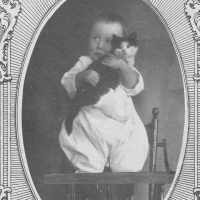 The Life Summary of Lewis Daniel

Put your face in a costume from Lewis Daniel's homelands.

Starting with the sinking of the RMS Lusitania, which killed 128 American citizens, and many other conflicts with trade from Germany. Congress held a special meeting that resulted in The United States declaring war on Germany. Formally entering the First World War.

English:1. nickname for a person with red hair or a ruddy complexion, from Middle English re(a)d ‘red’. 2. topographic name for someone who lived in a clearing, from an unattested Old English rīed, rȳd ‘woodland clearing’. 3. habitational name from various places: Read in Lancashire, the name of which is a contracted form of Old English rǣghēafod, from rǣge ‘female roe deer’, ‘she-goat’ + hēafod ‘head(land)’; Rede in Suffolk, so called from Old English hrēod ‘reeds’; or Reed in Hertfordshire, so called from an Old English ryhð ‘brushwood’.