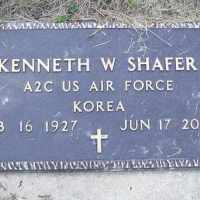 The Life of Kenneth William

Put your face in a costume from Kenneth William's homelands.

After a contract proposal reducing wages by $1.10 a day, employees of the United Mine Workers came together and created the Progressive Miners of America in southern Illinois. After discontent arose over the 67 years of operation, the union was dissolved.
1947 · The Presidential Succession Act