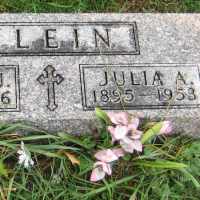 The Life of Julia A.

Put your face in a costume from Julia A.'s homelands.

"Spindletop, located south of Beaumont, becomes the first major oil well to be discovered in Texas. Other fields were discovered in shortly after, which ultimately led to the highly impactful ""oil boom""."
1912 · The Girl Scouts

French, English, and German: from a pet form of Paul .