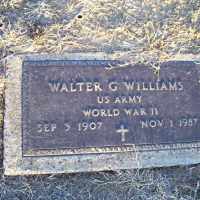 The Life of Walter Glover

When Walter Glover Williams was born on 3 September 1907, in Roanoke, Denton, Texas, United States, his father, Robert Lee Williams, was 23 and his mother, Mary Lou Terry, was 20. He had at least 2 sons and 1 daughter with Ollie V. Myrtle Hogan. He registered for military service in 1943. He died on 1 November 1987, at the age of 80, and was buried in Bowie, Montague, Texas, United States.

Put your face in a costume from Walter Glover's homelands.

Known as the National Bureau of Criminal Identification, The Bureau of Investigation helped agencies across the country identify different criminals. President Roosevelt instructed that there be an autonomous investigative service that would report only to the Attorney General.
1914 · Steamboat Service Established with New York