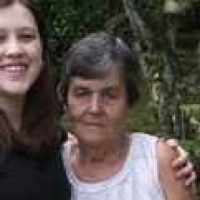 The Life of Ubaldina Cardoso

When Ubaldina Cardoso Selau was born on 16 May 1932, in Torres, Rio Grande do Sul, Brazil, her father, Pedro André Selau, was 40 and her mother, Maria Cardoso Selau, was 33. She married José Griebler on 10 September 1955. They were the parents of at least 1 son. She died on 23 October 2015, in Praia Grande, Santa Catarina, Brazil, at the age of 83, and was buried in Morrinhos do Sul, Rio Grande do Sul, Brazil.

Put your face in a costume from Ubaldina Cardoso's homelands.

Hebrew: A male name derived from the scriptural name Selah or Shelah, signifying a weapon or missile, literally "sent," or "shooting forth." The Hebrew Séla is a rock of refuge, from which cames Selah or Sela (Petra), the chief city of the Edomites

There are no historical documents attached to Ubaldina Cardoso.