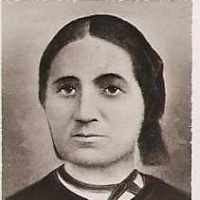 When Caroline Thomas was born on 11 April 1832, in Llanthony Prima Priory, Monmouthshire, Wales, United Kingdom, her father, Richard Thomas, was 28 and her mother, Mary Morgan, was 22. She married Zephaniah Jones on 13 February 1859, in Mynyddislwyn, Monmouthshire, Wales, United Kingdom. They were the parents of at least 4 sons and 3 daughters. She died on 18 December 1869, in Willard, Box Elder, Utah, United States, at the age of 37, and was buried in Willard City Cemetery, Willard, Box Elder, Utah, United States.