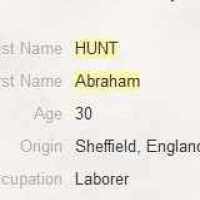 When Abraham Hunt was born on 25 December 1825, in Reed, Hertfordshire, England, United Kingdom, his father, William Hunt, was 42 and his mother, Marianne Holmes, was 32. He married Elizabeth Barton in 1852, in Sheffield, Yorkshire, England, United Kingdom. They were the parents of at least 1 son and 2 daughters. He died on 26 March 1884, in Montezuma, Poweshiek, Iowa, United States, at the age of 58, and was buried in Sheley Cemetery, Poweshiek, Iowa, United States.