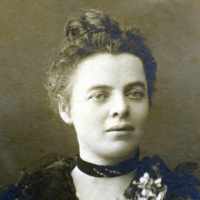 The Life of Jane Emma

When Jane Emma Biggs was born on 11 November 1860, in Colchester, Essex, England, United Kingdom, her father, Joseph Biggs, was 45 and her mother, Anna King, was 39. She married James Murray Grant on 23 December 1889. They were the parents of at least 1 daughter. She died on 25 October 1953, in Marrickville, New South Wales, Australia, at the age of 92.

Put your face in a costume from Jane Emma's homelands.

End of transportation to Western Australia.
1884

1 English: nickname for a large or stout person, Middle English bigge + unexplained -s.2 English: records of names such as William de Bigges (Cambridgeshire 1327 ) and Laurentia atte Bigge (Somerset 1327 ) suggest that it must also have a topographic or habitational origin, but the etymology is obscure.3 Scottish and northern Irish: variant of Beggs .