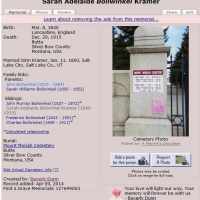 The Life Summary of Sarah Adelaide

When Sarah Adelaide Bollwinkel was born on 8 March 1840, in Liverpool, Lancashire, England, United Kingdom, her father, Johann or John Bollwinkel, was 29 and her mother, Sarah Williams, was 35. She married John L Kramer on 11 January 1860, in Salt Lake City, Salt Lake, Utah, United States. They were the parents of at least 1 son and 1 daughter. She died on 29 December 1915, in Butte, Silver Bow, Montana, United States, at the age of 75, and was buried in Mount Moriah Cemetery, Butte, Silver Bow, Montana, United States.

Put your face in a costume from Sarah Adelaide's homelands.

In Feb[rua]y I left Abergele for Rhyl were I took steamer for Liverpool in Company of Sister Mary Parry[,] Heighgate and Bror Peter Jones, Llysfain, and family. In Liverpool I met with my intended Wi …