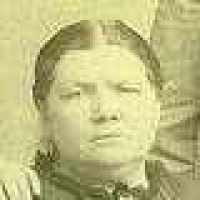 The Life Summary of Margery May

Put your face in a costume from Margery May's homelands.

Scottish, Manx, and Irish: nickname for a fair-haired man, from Gaelic bàn, Irish bán ‘white, fair’. This surname is common in the Highlands, first recorded in Perth in 1324. It is also found as a shortened form of McBain , from Mac B(h)eathain. As a Manx name (spelled Bane) this may be a shortened form of Manx Macguilley Vane, equivalent to Irish Mac Giolla Bháin ‘son of the fair youth’. Compare Irish Kilbane .English (northern) and Scottish: nickname for a hospitable person, from northern Middle English beyn, bayn ‘welcoming, friendly’ (Old Norse beinn ‘straight, direct’).English (northern) and Scottish: nickname from northern Middle English bān, bain ‘bone, leg’ (Old English bān, Old Norse bein), perhaps denoting someone with a gammy leg. In northern Middle English -ā- was preserved, whereas in southern dialects (which later became standard), it was changed to -ō-.