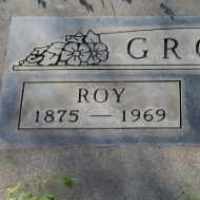 The Life Summary of Roy

English: topographic name for someone who lived by a grove or thicket, from Middle English grove, Old English grāf, or a habitational name from any of various places so named.English (of French Huguenot origin): Anglicized form of French Le Groux (see Groux ) or Le Greux.German: northern variant of Grob .