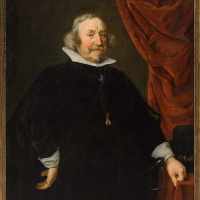 The Life Summary of Wolfgang Wilhelm

When Count Palatine Wolfgang Wilhelm Von Pfalz-Neuburg hse of Wittlesbach was born on 4 November 1578, in Neuburg an der Donau, Neuburg an der Donau, Bavaria, Germany, his father, Pfalzgraf Philipp Ludwig von Pfalz-Zweibrücken, was 31 and his mother, Anna von Jülich-Kleve-Berg, was 26. He married Magdalena Eleonore Magdalene von Wittelsbach Prinzessin von Bayern on 11 November 1613, in Munich, Bavaria, Germany. They were the parents of at least 1 son. He died on 20 March 1653, in Düsseldorf, North Rhine-Westphalia, Germany, at the age of 74, and was buried in Kreis Düsseldorf, Rhineland, Prussia, Germany.

Put your face in a costume from Wolfgang Wilhelm's homelands.