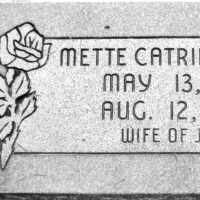 The Life Summary of Mette Catherine

Put your face in a costume from Mette Catherine's homelands.

An extremely common given name from the Middle Ages onwards, derived via Old French Marguerite and Latin Margarita from Greek Margarītēs, from margaron ‘pearl’, a word ultimately of Hebrew origin. The name was always understood to mean ‘pearl’ throughout the Middle Ages. The first St Margaret was martyred at Antioch in Pisidia during the persecution instigated by the Emperor Diocletian in the early 4th century. However, there is some doubt about her name, as the same saint is venerated in the Orthodox Church as Marina . There were several other saintly bearers of the name, including St Margaret of Scotland ( d. 1093 ), wife of King Malcolm Canmore and daughter of Edmund Ironside of England. It was also the name of the wife of Henry VI of England, Margaret of Anjou ( 1430–82 ), and of Margaret Tudor ( 1489–1541 ), sister of Henry VIII , who married James IV of Scotland and ruled as regent there after his death. See also Margery , Marjorie .