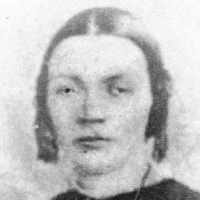 The Life Summary of Hansena Catharina

When Hansena Catharina Smith was born on 23 March 1833, in Ålborg, Vor Frue, Ålborg, Denmark, her father, Hans Peter Lund Schmidt, was 22 and her mother, Mette Larsdatter, was 27. She married Jens Christian Nicolaisen on 26 December 1854, in Nørresundby, Ålborghus, Denmark. They were the parents of at least 1 son and 3 daughters. She immigrated to Utah, United States in 1860 and lived in Jetsmark, Hvetbo, Hjørring, Denmark in 1845 and Copenhagen, Denmark in 1860. She died on 7 December 1865, in Corn Creek, Millard, Utah, United States, at the age of 32.

Put your face in a costume from Hansena Catharina's homelands.