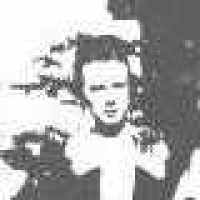 The Life of Bessie "Bee"

Put your face in a costume from Bessie "Bee"'s homelands.

1 Welsh: from the personal name Hywel ‘eminent’, popular since the Middle Ages in particular in honor of the great 10th-century law-giving Welsh king.2 English: habitational name from Howell in Lincolnshire, so named from an Old English hugol ‘mound’, ‘hillock’ or hūne ‘hoarhound’.