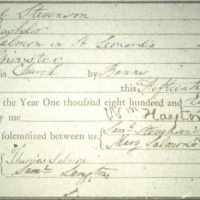 When Mary Salmon was born on 2 December 1800, in Leicester, Leicestershire, England, United Kingdom, her father, William Salmon, was 27 and her mother, Ann Branson, was 26. She married Samuel Stevenson on 15 June 1818, in Leicester St Margaret, Leicestershire, England, United Kingdom. They were the parents of at least 1 son and 1 daughter. She died on 29 August 1859, in North Ogden, Weber, Utah, United States, at the age of 58, and was buried in Ben Lomond Cemetery, North Ogden, Weber, Utah, United States.

English and French: from the Middle English and Old French personal name Salmon, Saumon, a shortened form of Salomon (see Solomon ). The Normans introduced it to England, and it was current as a personal name there until at least the end of the 14th century. The derived surname is found throughout 13th- and 14th-century England, mostly in the spellings Saleman and Salman, which eventually became regularized as Salmon. See also 2 below, compare Salman 3.English: occasionally perhaps a nickname for someone ‘as wise as Solomon’. In Chaucer's Canon's Yeoman's Tale, it is stated: ‘And whan we been togidres euerichoon, Euery man semeth a Salomon’. King Solomon was famed for his wisdom.English: nickname from Anglo-Norman French, Middle English salmon, saumo(u)n, saumun, samoun ‘salmon’, no doubt given to someone who caught, sold, or ate the fish.