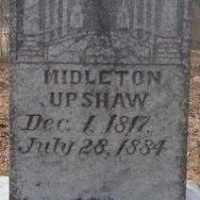 The Life of Middleton

Put your face in a costume from Middleton's homelands.

In 1830, U.S. President Andrew Jackson signed the Indian Removal Act which required all Native Americans to relocate to areas west of the Mississippi River. That same year, Governor Gilmer of Georgia signed an act which claimed for Georgia all Cherokee territories within the boundaries of Georgia. The Cherokees protested the act and the case made its way to the U.S. Supreme Court. The case, Worcester v. Georgia, ruled in 1832 that the United States, not Georgia, had rights over the Cherokee territories and Georgia laws regarding the Cherokee Nation were voided. President Jackson didn’t enforce the ruling and the Cherokees did not cede their land and Georgia held a land lottery anyway for white settlers.
1835

English (East Anglia): probably a habitational name from a lost or unidentified place named with Old English upp ‘up(per)’ + sc(e)aga ‘copse’, or a topographic name with the same meaning.