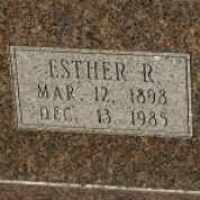 The Life of Esther Ruth

Put your face in a costume from Esther Ruth's homelands.

The Keokuk Dam was completed in 1913 and began to power the surrounding area. It was the largest single capacity powerhouse in the world at the time. After World War II, the powerhouse was modernized and all the units were converted in 2002. It remains the largest privately owned and operated dam on the Mississippi River.
1922 · Oldest radio station west of the Mississippi