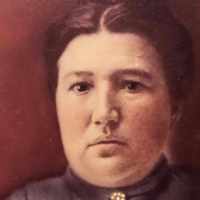 The Life of Maria Katherina

When Maria Katherina Lutz was born on 23 December 1873, in Frank, Saratov Oblast, Russia, her father, David Lutz, was 29 and her mother, Maria Elisabeth "Lizzie" Hill, was 24. She married Johann George Giesick on 12 January 1895, in Walter, Volgograd, Russia, Soviet Union. They were the parents of at least 3 sons and 7 daughters. She died on 2 December 1920, in Brush, Morgan, Colorado, United States, at the age of 46, and was buried in Brush, Morgan, Colorado, United States.

Put your face in a costume from Maria Katherina's homelands.

On Aug 1, 1876, The United States Congress passed an act making the Territory of Colorado the 38th state.
1886