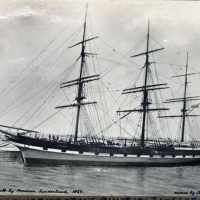 When James Murray was born on 24 September 1840, in Springholm, Kirkcudbrightshire, Scotland, United Kingdom, his father, James Murray, was 69 and his mother, Elizabeth McGeorge, was 30. He married Agnes Catherine Irving on 20 August 1860, in Saint Dunstan and All Saints Church, Stepney, London, England, United Kingdom. They were the parents of at least 1 son and 6 daughters. He lived in Mile End Old Town Holy Trinity, Middlesex, England, United Kingdom in 1871. He died on 19 June 1886, in Adelaide, South Australia, Australia, at the age of 45, and was buried in West Terrace Cemetery, Adelaide, South Australia, Australia.