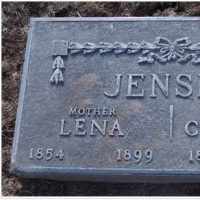 The Life Summary of Lena Martine

When Lena Martine Jensdatter was born on 4 February 1850, in Nørrebroen, Elling, Horns, Hjørring, Denmark, her father, Jens Larsen, was 40 and her mother, Christiane Jacobsdatter, was 33. She married Christen Jensen on 16 September 1865, in Endowment House, Salt Lake City, Salt Lake, Utah, United States. They were the parents of at least 6 sons and 5 daughters. She lived in Hune, Hvetbo, Hjørring, Denmark in 1855 and Jetsmark, Jetsmark, Hvetbo, Hjørring, Denmark in 1860. She died in April 1899, in Montpelier, Bear Lake, Idaho, United States, at the age of 49, and was buried in Montpelier City Cemetery, Montpelier, Bear Lake, Idaho, United States.

Put your face in a costume from Lena Martine's homelands.

Abstracted from various names ending in these syllables, such as Helena and Magdalena. In the United States it was particularly associated with the singer Lena Horne ( 1917–2010 ).